The case for encouraging churn

And other subscription pricing lessons from Netflix

When software escaped big box retailers, site-wide licensing, and IT department approval, suddenly all you needed to get a new tool was a credit card and a few dollars to spare. The rise of web apps turned software into a service, something you pay for every month instead of in one lump sum.

Subscriptions are a boon to anyone who ever struggled to justify spending hundreds of dollars on software upfront. They have also been a boon, though, to businesses that wanted to lock customers in and extract as much value as possible.

One doesn't have to look far to find hostile subscription practices: Yearly subscriptions advertised with their price per month. Accounts that require a phone call to cancel. Surprisingly cheap plans that turn out to not include the product's most advertised features. Features that seem to work, only to require an upgrade before you can save your work.

Software is quickly becoming the next cable bundle and cell phone plan, subscriptions you may choose to live with but complain about whenever given the chance. Yet, one popular subscription, the very one replacing cable, rarely garners the same complaints: Netflix.

Embrace churn. It's your friend.

Perhaps it's the nature of their product, delivering must-see entertainment we'd hate to miss. Perhaps it's the depth of their service, with a seemingly endless list of content, far more than $12.99 could otherwise buy.

Or perhaps it’s the very thing that made subscribing so easy in the first place: You can cancel Netflix whenever you want.

Churn, the percentage of existing subscribers who cancel their accounts, is perhaps the most dreaded thing in software today. With enough churn, it's impossible to grow, as you lose customers as fast (or faster) than you gain them.

You could fight that by locking customers in, keeping them from leaving even if they want to. Hide the cancelation button, require customers to call or email to cancel, make it difficult to migrate data, or lock them into annual accounts and charge them to leave.

Or, you could do what Netflix does: Leave the door unlocked and the Exit sign turned on. Let people leave anytime they want. Fight churn instead with a better product, and keep people coming back not because you forced them to stay, but because they truly want what you offer. 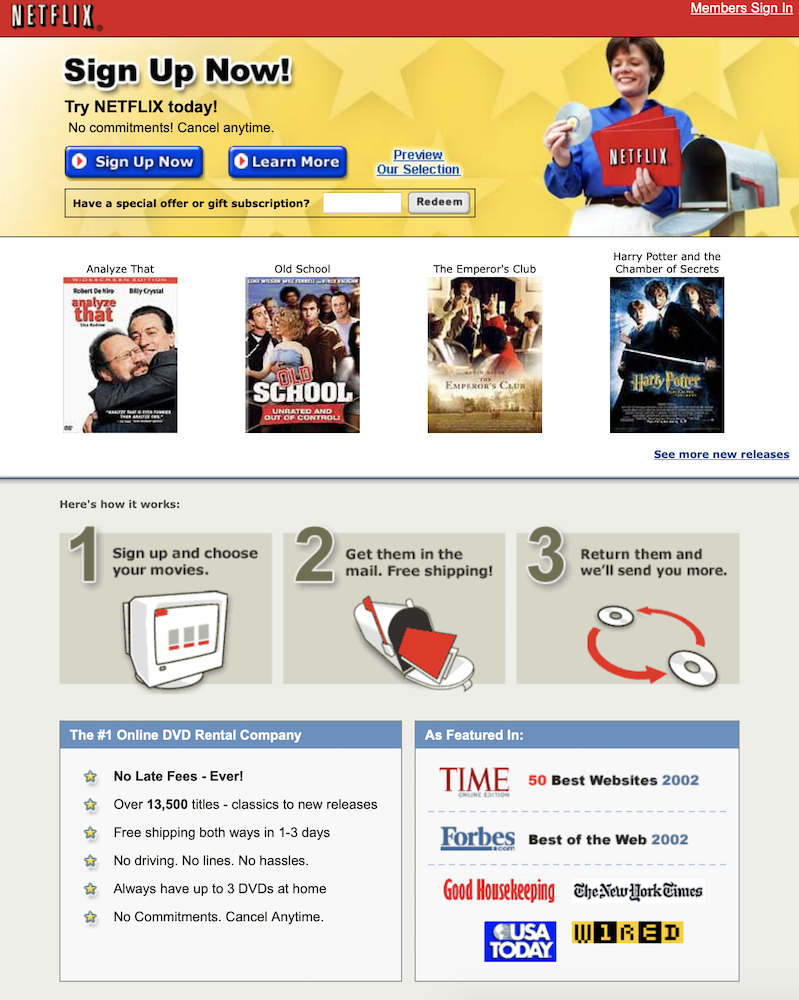 From its earliest days of mailing DVDs in iconic red envelopes, Netflix competed with video rental stores that were better known for onerous late fees than for the videos they supplied. Not Netflix. They promised no late fees, no commitments. Not quite sure about renting through the mail, much less subscribing for unlimited movies? No worry, you can cancel anytime.

That commitment didn’t stop with DVDs. As Netflix’ focus shifted to steaming shows produced in-house, they kept the same customer friendly approach to cancelation. If anything, they doubled-down, listing “Cancel anytime” right above the signup button.

Investors worried, speculating if you didn’t lock customers into long-term contracts, they’d flee as soon as they finished a show. Netflix thought otherwise, telling the SEC that “management believes that in a largely fixed-cost streaming world with ease of cancelation and rejoin, the churn metric is a less reliable measure of business performance, specifically consumer acceptance of the service.”

Cancel Netflix for a couple months to catch up on Game of Thrones with an HBO subscription? Netflix isn't surprised—they've already planned to get you to resubscribe with the next season of Stranger Things.

It’s not only talk. Canceling Netflix takes 3 clicks: Open the Netflix Account page, click the prominent Cancel Membership button, then confirm with the Finish Cancelation button. They follow through with their promised simplicity.

Here’s how to do that in your service:

Churned customers aren’t a pure loss to your business. They paid for some period of time, after all, bringing in more revenue than someone who never subscribed. And now that they churned, it’s a learning experience. You can see when they canceled their account, see when they signed up again if they do, and learn from each step in the process. Use that to improve your product—not to lock customers in.

Canceling accounts is scary, though. Will you lose your data, and have to start over when you come back? Perhaps your Netflix library isn't crucially important, but it’d still be annoying to figure out which episode you last watched, and reteach the algorithm which shows you like.

Cancelation screens could be an easy place to scare customers into staying, to make them worry again if canceling is the right choice. Netflix, instead, reassures you. They tell you again that it’s fine to cancel, and that they’ll keep your data around for 10 months. You’ve already paid for this month, so Netflix tells the exact date your subscription will run out, and lets you continue watching until then.

That highlights other great subscription policies:

Ever wondered why customers might choose to purchase your subscription as an in-app purchase, or via PayPal, instead of entering payment details directly? Control is a large part, almost more than the convenience. We know we can unsubscribe anytime in the App Store or PayPal, so even if customers don’t love either of those products per se, they do trust them and know at least they can unsubscribe easily.

Treat users well. Give them all the info they need, without unnecessarily scaring them. Don’t make them stay, and they’ll be more likely to come back, more likely to trust you with their billing info in the first place.

Pricing shouldn’t be difficult. A quality item for a fair price that doesn’t change without reason, that’s what most people expect.

What customers don’t expect is to pick up a widget and need to ask the price—only to then wonder if the customer before them was told the same price.

Software subscriptions already take a leap of faith to hand over your credit card details for a monthly charge. Don’t make it harder on customers by hiding your product’s true price. 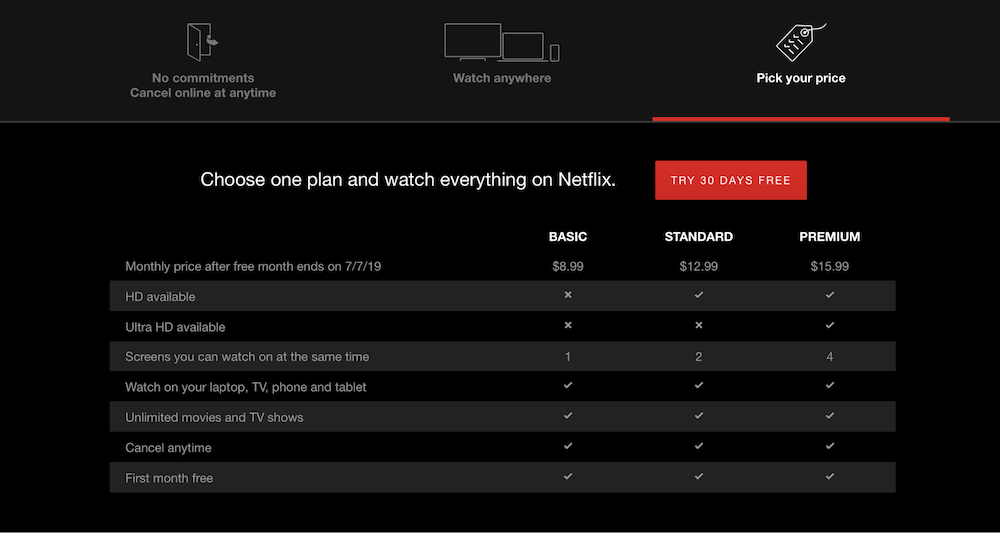 Netflix, true to form, is upfront with pricing. First, you get a free 30 day trial, the full library included. Then, on the landing page, you can see the three plan options with their features.

Only on signup do two less transparent practices come in, things your app should try to avoid. First, while the core landing page shows all plans equally, the signup flow highlights the most expensive plan, subtly pushing you towards that option instead of leaving the choice open. Then, you have to add payment info to start a free trial, something that the clear cancelation policy makes less frustrating, but still leaves the potential for users to sign up, forget to cancel, and end up paying without intending to.

There’s one other thing that Netflix could be a bit more upfront about: Sales tax. Smaller apps often either don’t charge sales tax, or simply include it in the price and hide it from customers (as VAT is often treated around the world). Larger companies, Netflix included, add tax with the final bill. That’s fine, but be sure to note it so customers know what to expect (which Netflix does, though only in their help docs).

That highlights some of the common subscription pricing issues that, while not as bad as holding customers’ hostage to their accounts, are equally likely to make customers hate subscriptions. Here’s what to do to avoid them:

Deliver more value than anyone expects.

Netflix, of all services, could likely get by with less customer friendly policies, a bit more nudging to upgrade and less obvious cancel button. After all, where else would you watch Stranger Things, Black Mirror, Rilakkuma and Kaoru, and more? HBO for years required a cable subscription, and even today its HBO Now subscriptions are often tied to carrier deals around the globe, yet people are willing to jump through hoops to watch Game of Thrones and Chernobyl.

That makes Netflix’ stance all the more commendable. They aren’t making it easy to cancel merely to attract customers to a sub-par product—they’re offering it from a position of strength. They mastered “consumer acceptance of the service,” and gave us hundreds of reasons to keep subscribing.

Do that with your product. Don’t make your subscriptions be a way to extract value, to smooth out your revenue curve and ensure customers upgrade—as many traditional software turned subscriptions feel. Don’t make customers feel hostage to your service, required to keep using it to maintain their data, as many newer apps’ subscriptions feel. Instead, build that better mousetrap, and people will be more than willing to pay for it, time and again. They won’t question why you’re billing their credit card, they’ll be surprised they’re only paying that much.

In the short term, you may be able to boost metrics through growth hacks that trick customers and create friction for cancellations and downgrades. Those boosts, though, come at immense cost.

In addition to obvious brand costs of making your customers feel duped, there are also product costs. Any friction you create for churning customers directly taints your ability to understand the value your product delivers.

The world of on-premise lifetime lock-in to enterprise software is gone, and it’s not coming back. No matter how much friction you create, your customers will find their way out the door if a better solution exists. And the easier it is for them to find that door, the faster you’ll learn how to save the next customer—and to possibly win back the churned customer.