Any insights about the forthcoming Flow X?

Looks like a contender against Slack — curiously designed by the same folks who designed the first version of Slack! 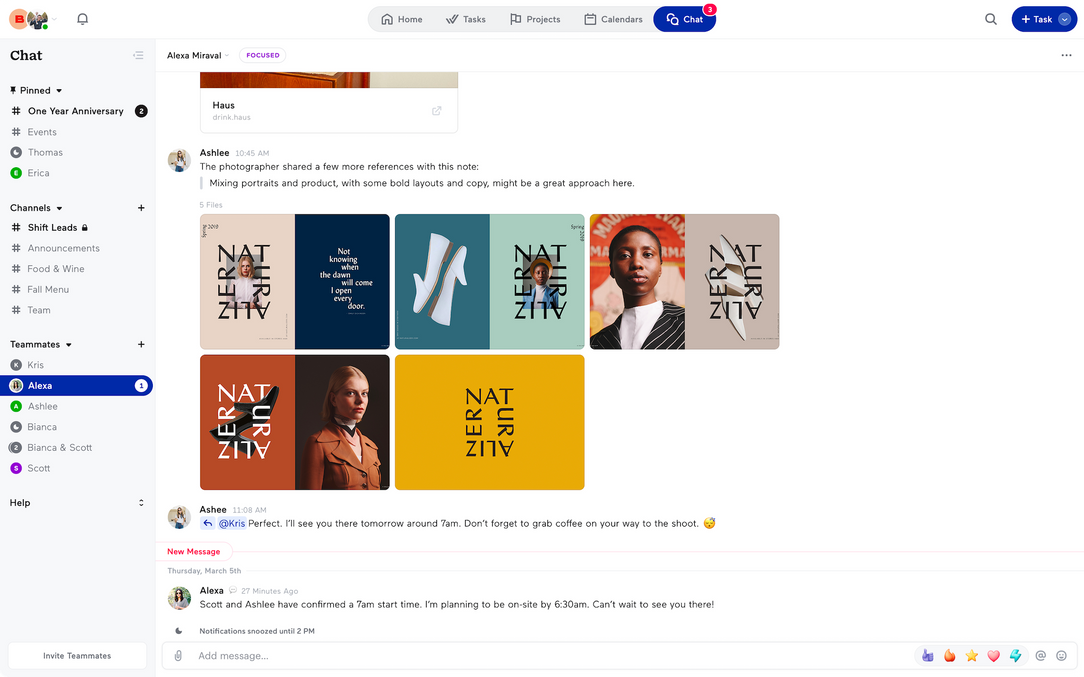 Woah this is the first time I'm seeing it, but that's fascinating. Only two direct link mentions on Twitter, and a handful of people mentioning the product name, though looks like they've got >300 beta testers so far, and are planning to launch out of beta on July 15th.

The landing page there looks like it's a Slack competitor, though from Twitter looks like this is actually a full new version of their Flow project management app. So there's a chat tab, but also tasks, projects, calendar, and more. Perhaps closer to Basecamp ... albeit with a much more Slack-style chat, and with some of the same design DNA.

I've got an older Flow account (from older work where, fun fact, I did support + documentation for their team years ago before Slack, a few Flow versions ago. Flow more than most apps tends to get a full redesign every few years; I should have kept screenshots of every version along the way) and the beta is actually open to anyone using Flow so ... let's give this a spin. Starts out with a clean homescreen that shows your due tasks and mentions, for a way to catch up and get to work. Could see that being useful with catching up on chat, if people mention you in every consequential message.

The Tasks view is similar to before; reminds me a bit of Asana and Todoist's task view. Pretty similar to original Flow.

The Projects view is like a kanban board to organize your company's work into sections and projects. You can choose to set each project as a list or kanban board by default, and can schedule stuff on a Gantt chart, depending on your plan.

And then, the Chat view is the big new thing—though Flow has had chat for years (my testing account had messages dating back to 2015. The difference here is the design.

Like Slack, you've got channels for chat, direct messages, mentioning, and emoji auto-complete. You can't mention a channel to link to it, though, and the only reaction option on messages is a like button. There's also no chat threading, or integrations today. So ... it's more similar to Slack at first launch than Slack today. More powerful than Basecamp's built-in Campfire chat, and focused on the whole company, across all projects (where Basecamp has one Campfire chat per project).

New pricing isn't out yet, but curious on that as well, as Flow's Twitter mentions a cheaper Solo plan, and that their Pro team plan will go down to $10/month/user.

Interesting times—especially with the Basecamp team hinting that they're launching a new version next year.

I tried Flow about four years ago and they were always interested in chat. I never gave it a fair shot. Interesting to see how this new rebrand/relaunch will pan out 🤔

What’d you end up picking over Flow?

@optemization (replying to @maguay )
2 years ago

Airtable, then added Notion to that.

Ahh perfect! My former team did something similar. We went from a Google Sheets spreadsheet to Trello to Airtable—then Notion was one of the first team tools we adopted when starting Capiche.

What are your favorite small, single-purpose apps?

There are plenty of advanced, powerful software filled with enough features to do almost anything. And then there are the tiny utilities that don't do much, but that are great at what they do do. ...

Calendar : The Track App https://thetrackapp.com (Disclosure: I founded it) It's really fast ! ... 3 points

💯here are my favs for MacOS: - snippets: textexpander.com - windows arrangement: magnet - emojis:... 2 points
Do you use Readwise app? How much are you paying for the service?

I came across Readwise this week and I thought it was a very nice app. It sends emails with highlights from Kindle books, Instapaper, Pocket, iBooks and other services. It also offers the spaced re...

I recently subscribed to the light version for a whole year. So far, I’m a bit divided about Read... 3 points

Can't believe I ever caught this, great question! Founder of Readwise here. We offer a 50% of di... 2 points
How do you manage your chat inbox?

We're currently discussing Slack, Notion and 917 other software products. Join in the conversations: