How do you find new software to use?

The market is bursting with new software, a lot of new products are launching every day. A few months ago I posted on Capiche about my SaaS idea. Your feedback is priceless and helped us to change our direction a bit to deliver a better solution. Thank you so much! It worked actually: we got more positive feedback from our early users. 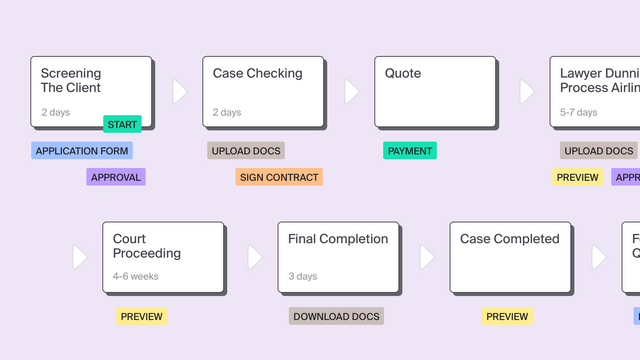 We are working on a product, it is in private beta for now. It automates repetitive tasks like collecting documents, forms, files, payments, etc. from clients. You can build the whole process via Beau. And guide clients through the business processes, step-by-step.

We are currently trying to better understand how traditional businesses in the legal industry, real estate, accounting, marketing, etc. implement new software to their processes. So my question is how do you usually found out about new promising software? What convinced you to start using it?

Have you ever been one of the first users of some software?

I'm infinitely curious about software, love trying out new stuff, and thus am quick to join beta programs and try stuff out even if ultimately I won't end up using it. That partly is due to my work (or my work has been a reflection of that interest) in writing about software. I tend to discover new software through indie blogs and newsletters (sites like MacStories now), Twitter (by following indie developers who tend to share new apps from others), following Product Hunt and recommendations here at Capiche and other sites like Hacker News, and by regularly researching alternatives to tools I already use (AlternativeTo was a great resource for this, though I haven't used it as much lately).

I'd say much the same as @maguay: online discussions and blogs often surface suggestions, as do occasional bursts of focused research. The caveat is that I'm becoming more wary of my shiny object syndrome. Trying new solutions costs money (sometimes) and time and energy (always). Sites like this one are useful, then, to vet ideas before trying them. I also lean on G2, Capterra, and YouTube for breakdowns.

@pendolino (replying to @maguay )
a year ago

Speaking of new software this looking interesting and its not on here yet rows.com

@Oshyan
a year ago

I have a variety of sources for finding new tools and other productivity and tech-related news, which have evolved over time. Sites like TechSpot are sort of the "old guard" in my daily reading, a decent portion of which I get through RSS still. I also subscribe to several newsletters which surface stuff. But, since actually becoming active on Twitter, I'd say that is probably one of my biggest sources of new app info. Once you plug-in to one or two people involved in the right communities, they and their retweets, @mentions, etc. will lead you to as many new apps as you can handle. And very often the devs are on there with their own accounts, separate from the official ones, which can give you a more behind-the-scenes view. Lots of people also tweeting about their app ideas and developments pre-launch, which is fun, and gets you that "one of the first" badge. 😄

But also relatively recently I became involved in a productivity community called The Productivists, which is not huge, but has a very high ratio of smart and curious people who - like me - are always seeking out and trying new tools. I've learned about more amazing new tools there than probably anywhere else in the last 6 months, and a number of the developers of tools also participate (Obsidian, Memex, and others). Our Discord is the most active area, although the forum also has some great deep dives, tool/workflow discussions, etc. https://discord.gg/uyFGPbG29p

Professionally I am primarily a real estate developer, although that is only as of about a year and a half ago. Before that I was in IT and software publishing for 20 years, emphasis on the tech/support/infrastructure side of things, and always working with small companies or individuals. I still do a bit of tech consulting on the side. And most recently I've gotten interested in and started experimenting with setting up community spaces for software startups and small businesses, so I'm now researching and testing those tools heavily as well (Discourse, Discord, Slack, Circle, Tribe, etc.).

Like @maguay I am a software enthusiast, so I often try out new tools just for my personal interest, I readily join beta/alpha tests, and give proactive feedback through whatever channels are provided. Occasionally I even write articles or long posts about the subject.

That said I think it's fair to say my "personal interest" is actually motivated ultimately by a combination of looking for tools to serve my own, my business's, or my client's needs, and my own interest in potentially creating a software startup myself one day. So basically it's productivity-oriented tool search combined with competitive landscape research.

@NBNite (replying to @Oshyan )
a year ago

Joined myself as well - thanks @Oshyan!

@evilsizor (replying to @Oshyan )
a year ago

Just joined — thanks for the heads up and link! :)

@pendolino
a year ago

this is a treasure trove of useful info https://talk.macpowerusers.com/

I've split my messaging workflow with personal messages mostly in Whatsapp and professional messa... 1 points
What are your favorite small, single-purpose apps?

There are plenty of advanced, powerful software filled with enough features to do almost anything. And then there are the tiny utilities that don't do much, but that are great at what they do do. ...

Calendar : The Track App https://thetrackapp.com (Disclosure: I founded it) It's really fast ! ... 3 points

💯here are my favs for MacOS: - snippets: textexpander.com - windows arrangement: magnet - emojis:... 2 points
Do you use Readwise app? How much are you paying for the service?

I came across Readwise this week and I thought it was a very nice app. It sends emails with highlights from Kindle books, Instapaper, Pocket, iBooks and other services. It also offers the spaced re...

I recently subscribed to the light version for a whole year. So far, I’m a bit divided about Read... 3 points

Can't believe I ever caught this, great question! Founder of Readwise here. We offer a 50% of di... 2 points
The community for
Capiche
Discord
Capiche
power users.
Join in.
Learn more about Capiche.
You're in good company.

We're currently discussing Discord, Capiche and 917 other software products. Join in the conversations: