What are the best Wunderlist alternatives?

9 years ago, a new startup in Germany proved to-do lists didn’t have to be boring and sterile. Wunderlist was the perfect to-do list for 2011, when the iPhone still had bubbly buttons and the popular new apps looked more like real-world items than software. And here came Wunderlist with its beautiful background pictures and rounded buttons. It worked everywhere, with desktop and mobile apps, and was quickly the new popular way to get things done. 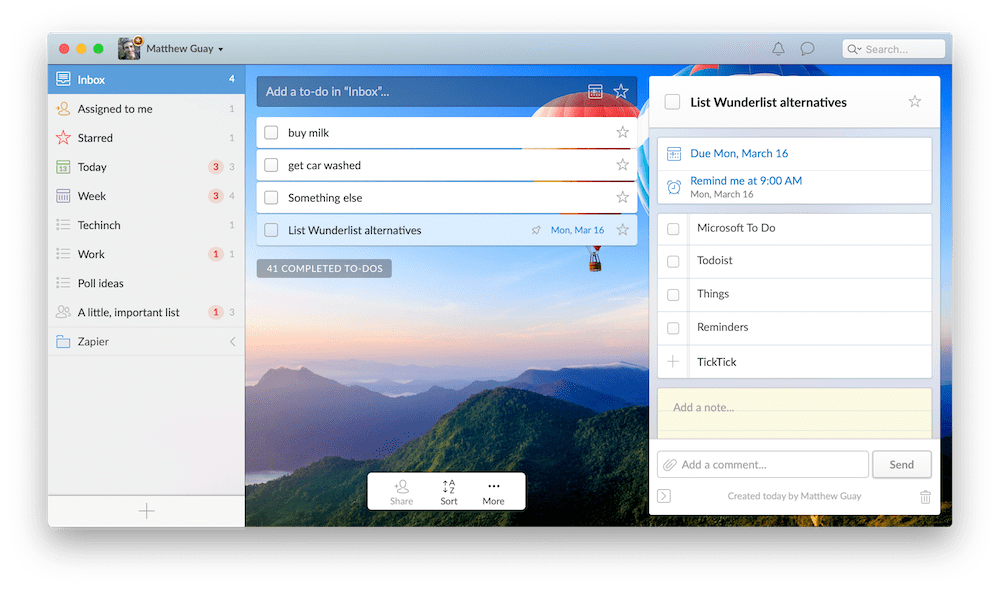 Wunderlist was great partly because of its design that made tasks a bit more fun, partly because it was simple enough to make task organization not feel like work. It was just enough better than a paper to-do list to make it worth using—it synced your phone and computer, let you attach files and notes to tasks, and would remind you when stuff was due—without being so complicated you’d ignore it. It hit the right spot for persona tasks.

Then in 2015, Microsoft acquired Wunderlist, and years after building the new Microsoft To Do, it’s the end of the line for Wunderlist. After a few reprieves, Microsoft is shutting down Wunderlist on May 6th, 2020.

You need a new to-do list—and you’ll likely want one that’s simple, easy to manage personal tasks, nicely designed, and free at least to start. Something that fits what attracted you to Wunderlist in the first place.

So what’s the best Wunderlist alternative? 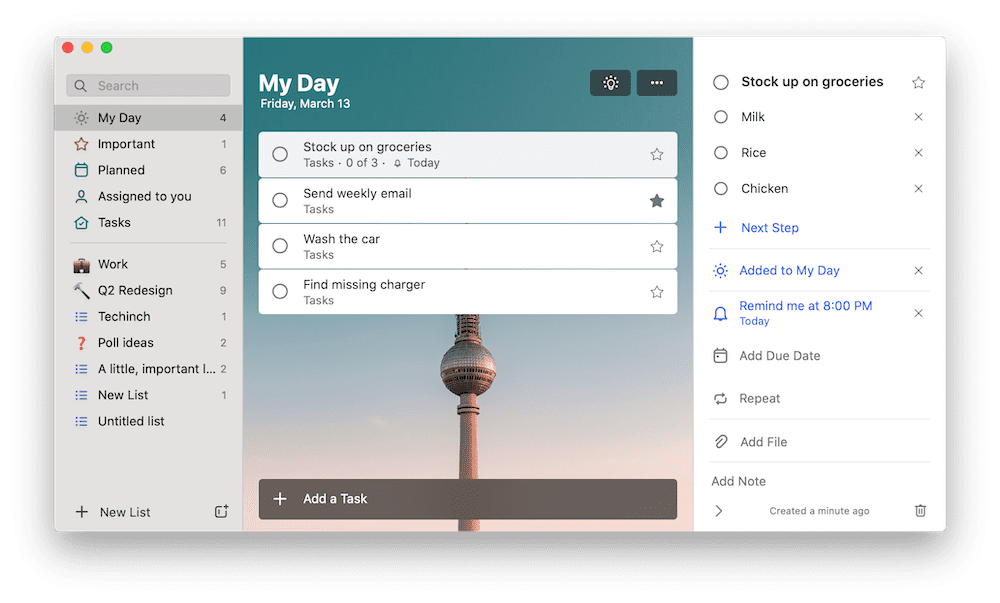 The obvious heir to the Wunderlist throne is Microsoft To Do, the task management app built by the Wunderlist team after they joined Microsoft. It has many of the same features: Background pictures, tasks organized by list, task details that show up in a right sidebar when you click on a task. There are a few changes—subtasks are now called “Steps”, for instance—but if you’re used to Wunderlist you’ll feel right at home. The first time you open it, it’ll pull in your Wunderlist tasks so you can pick up where you left off.

And there are some new tools, too. Microsoft To Do features a My Day view that shows today’s tasks, with a Suggestions button that recommends overdue and neglected tasks you should add to your day if you have extra time. It also works well with Outlook, something @faruque shared as their favorite feature. “So far it's the only application I found that links flagged emails on Outlook to your to do list,” says @faruque. “If you rely on Outlook, then it's perfect.”

It’s free and works on every platform (except Linux, though the web app would work there), which is what @bshyong found best about Microsoft To Do: “Cross-device syncing and it just works; no fancy features.” While it doesn’t have as many integrations as Wunderlist, it does support the Outlook Task API so you can build integrations if you want. Microsoft To Do is still missing a number of Wunderlist features including smart dates, notification settings, and printing—but it's still close enough, it’s almost Wunderlist with a different name. 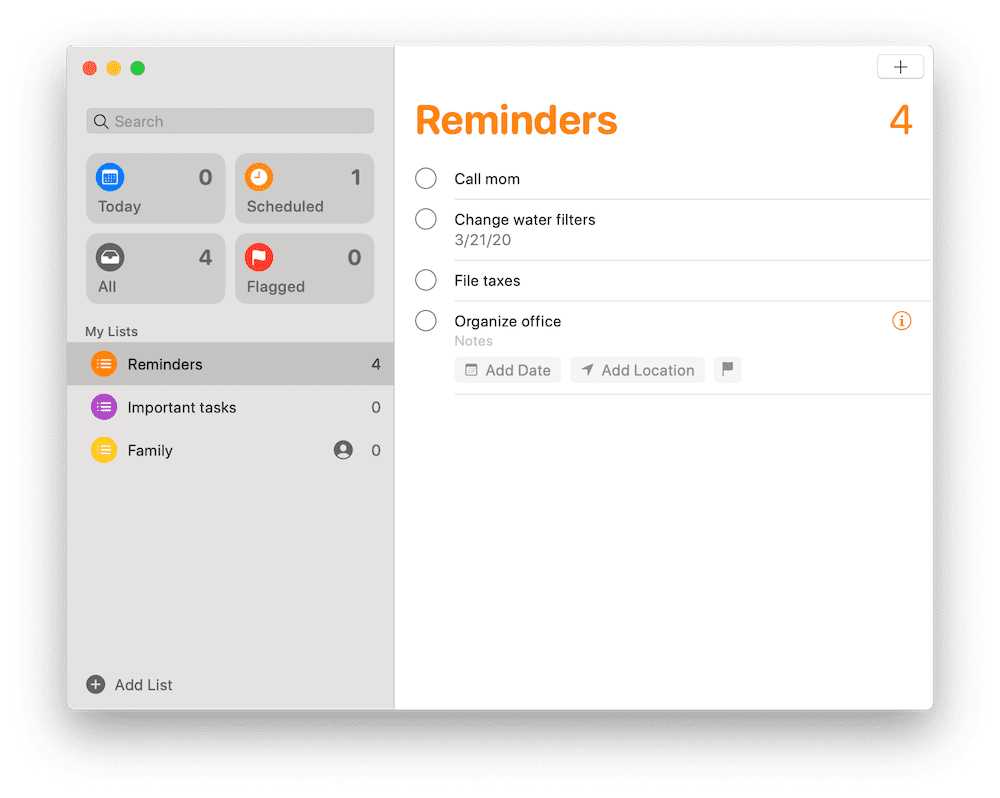 “Hey Siri, remind me to change the water filter tomorrow.” And it is so.

Apple Reminders is perhaps the best reason to use Siri, apart from setting alarm clocks, and vice versa. If you find yourself thinking of tasks while doing other things and would like to quickly dictate or type them down, Reminders is a perfect fit. It’s free and built into every iPhone, iPad, and Mac—and works online at iCloud.com.

Reminders is a simple to-do list app, with a checklist of things you need to do. Today shows what’s up today; scheduled shows things with reminders for the future. Add new lists and drag tasks to organize them further—and share lists with others, including a default Family list shared with everyone on your Apple ID family plan.

There’s no sub-tasks and limited note options, but if you just want a task list—and one that you can dictate tasks to without much thought—it’s a nice place to start.

Free with an Apple device. 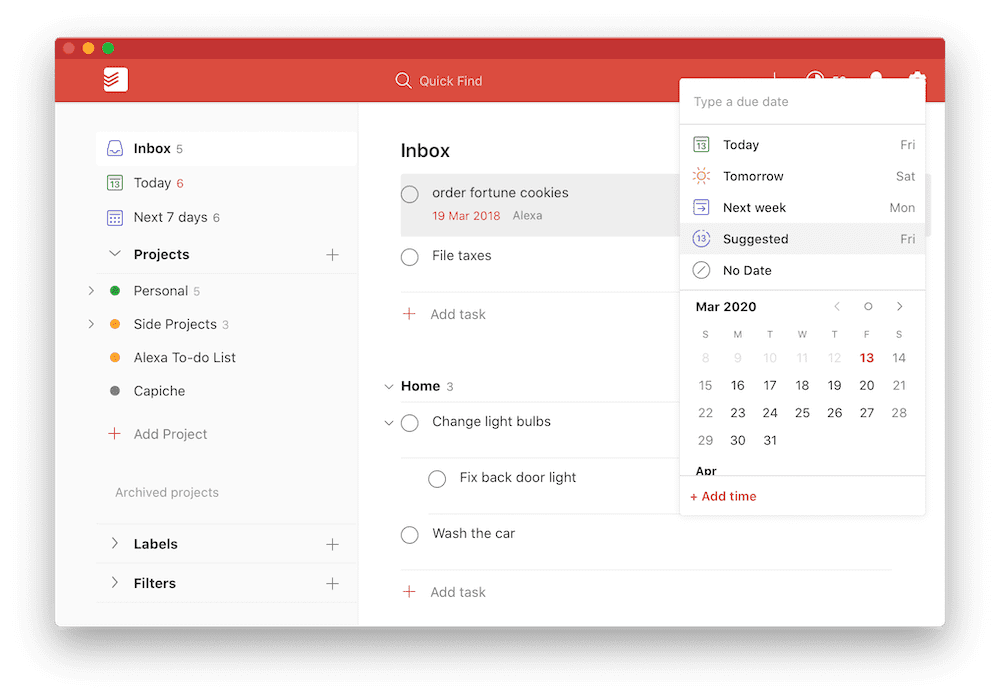 Todoist is the power user to-do list app. It can be as simple as you want—the default view is just a checklist of tasks, focused on what needs to be done today. Or you can click tasks to add sub-tasks, comments, add reminders, and more.

Its power comes from organization. Add lists and sub-lists, then click the top-level list and see everything in each of the sub-lists together. Drag a task under another task to turn it into a nested sub-task. Check off a task to complete its sub-tasks too. It’s like an outline for your work.

And as you work, Todoist keeps track, showing points in the toolbar and congratulating you as you hit your goals. It’ll show how many tasks you’ve completed over the past week and your productivity streaks, and will make you want to keep checking off tasks. It’s like a workout app for productivity. 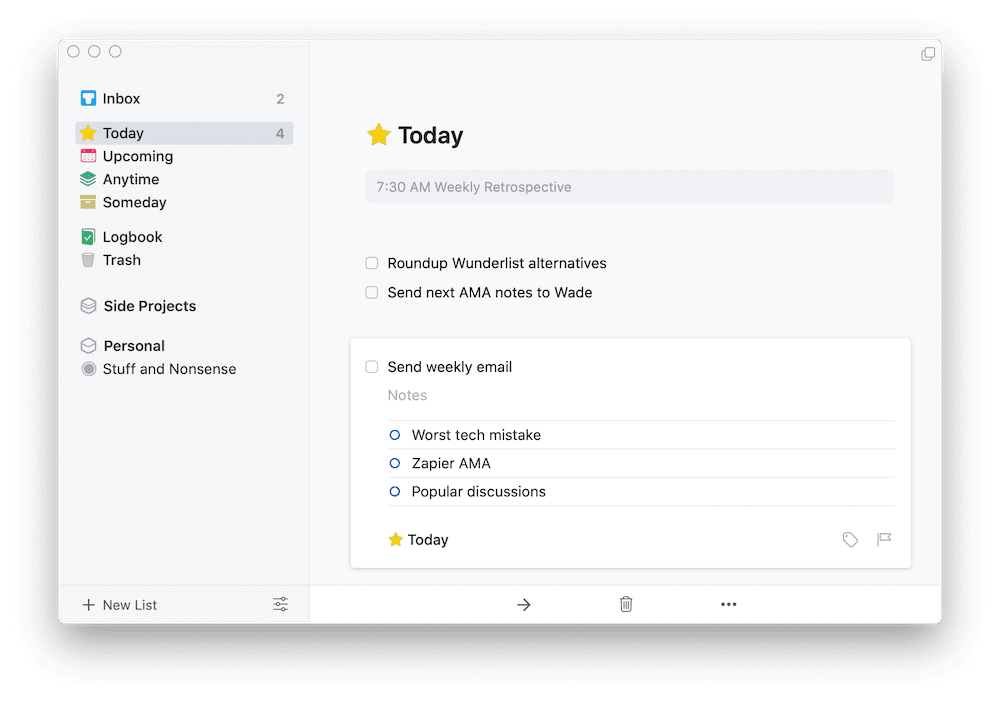 If polish and style is what you’re looking for, Things is the to-do list app to use. Much like how Wunderlist deeply embraced the design trends of its time, Things is carefully designed around the latest Mac and iOS designs—with little extras thrown in. There are small animations as you add sub-tasks and reminders, among other tiny design touches that make it a fun way to manage tasks.

Things shows your calendar alongside tasks, so you’ll know everything that’s coming up. You can look through the future in the Upcoming view, or look back at what you’ve accomplished in the Logbook. And like a to-do list on paper, if you want to split the list up and divide it into sections, you can do that in Things projects, complete with notes on the list to keep everything about the work in one place. 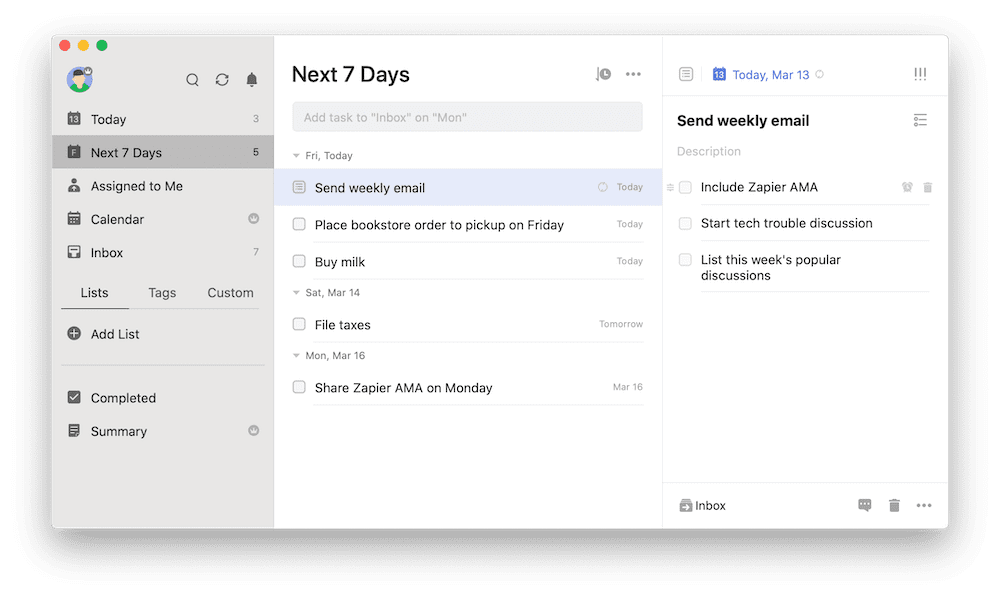 TickTick feels like Wunderlist, redesigned minimally. No bright colors or photo themes, just a plain list of your tasks with a sidebar to add description, due dates, and sub-tasks. There’s a Today and Next 7 Days list, much like Wunderlist’s companion Today and Week lists.

When you want to schedule more granularly, TickTick has several different calendar views to visualize and rearrange your tasks. You can add multiple reminders to any task to make sure you really get things done. It has a pomodoro timer to get you to focus on one task at a time. And it has built-in dictation support to tell your to-do list what you need to do. 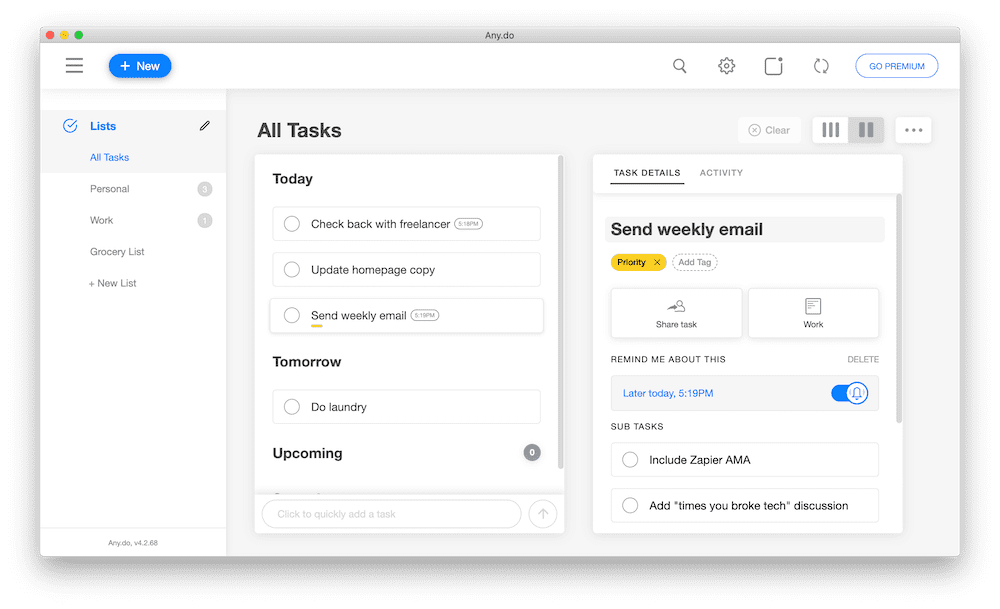 Today. Tomorrow. Everything else. That’s what Any.do’s built around.

It’s as simple as a paper to-do list, with your tasks organized by what needs your focus today and tomorrow. Don’t get to something today? It’ll get moved into tomorrow’s Today list automatically.

Much like Wunderlist, click tasks to add more details in the right sidebar. It has a special Grocery List mode that sorts groceries by category automatically to help you shop faster. And if you have too many tasks to do yourself, the Any.do team has personal assistants you can hire per task to get help. 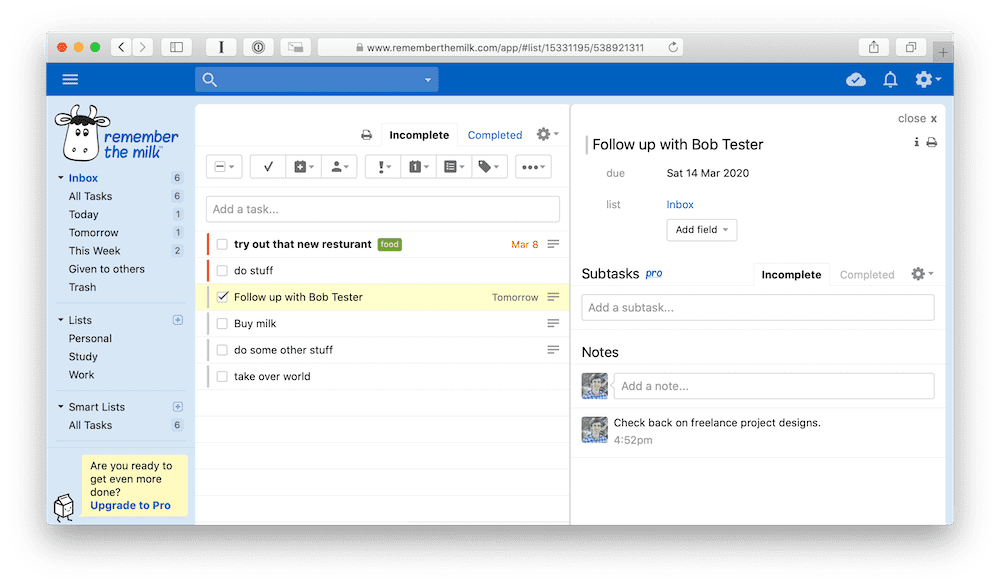 One of the original to-do list apps, Remember the Milk has been managing tasks for over a decade and a half. It’s simple, with power features hidden just below the surface.

Type in tasks, and you can categorize and schedule them while you’re typing with “Smart Add,” Remember the Milk’s syntax to add recurring reminders, priority, and more to tasks. You can open that same Smart Add bar with a keyboard shortcut anywhere on your computer, for a Superhuman-style command palette for your tasks. Organize tasks and sub-tasks with Gmail-style tags, color coded to stand out. And once your lists start filling up, find what you need with advanced search-powered smart lists.

It syncs tasks with Microsoft Outlook and Gmail, too, and integrates with Google Assistant to add tasks by voice from anywhere. 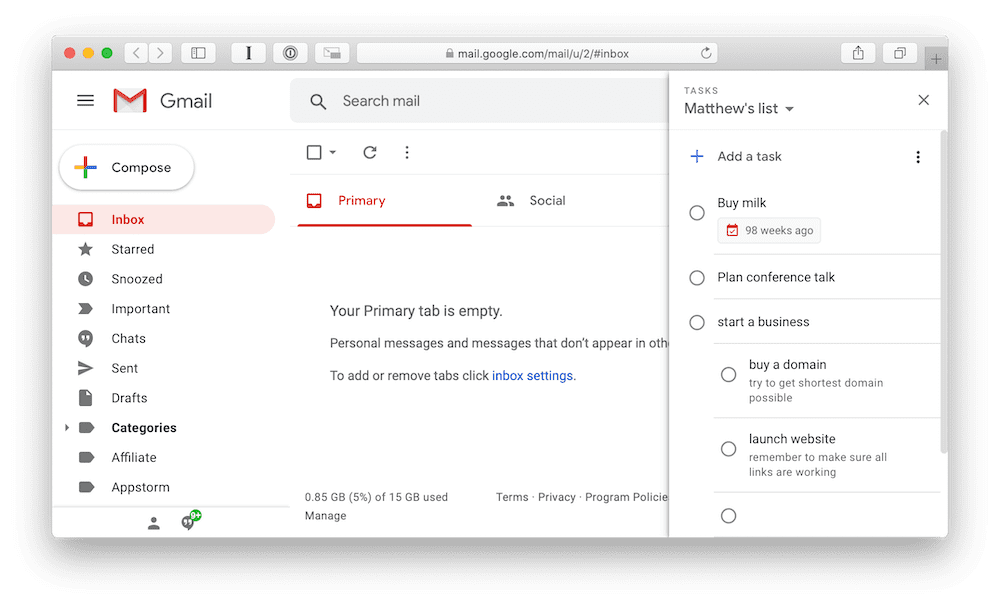 Here’s the absolute simplest to-do list app you could choose: Google Tasks, the to-do list in the sidebar of Gmail and Google Calendar. Click the checkmark icon in the sidebar to see a simple plain text list. Write tasks, press enter and write another, then click the pencil icon to add details, a due date, or sub-tasks.

Perhaps its best feature is Gmail integration. Have an email you need to work on later? Drag it from Gmail into the sidebar to turn it into a task.

And that’s it. If less is more, this might be the best to-do list app of them all.

The best to-do list app is the one you’ll actually use.

What’s the best to-do list app? Ask the Capiche community, and you’ll get dozens of answers. Simple task apps for some, full-featured project management software for others. @dharmesh doesn’t even use a to-do list, relying on starred emails as a to-do list instead.

The best app for you is the one that works the way you need it to. What do you need from your tasks? Something simple to write tasks down? Tools to organize work? Collaboration? A beautiful design to make you want to use the app?

There’s no single best to-do list app. The great thing is, there are so many options out there, there’s bound to be one that fits you best.

Join in the conversation:

What is your favorite to-do list app?
View Discussion

I use Confluence at work, Notion for personal. I’ve used Notion the odd times for quick/presenta... 9 points
The community for
Any.do
Google Workspace
Microsoft Office 365
Todoist
Things
Any.do
power users.
Join in.
Learn more about Capiche.
You're in good company.